Take off your crown, Hercules!

What would you do to take an astonishing touristic selfie? How about remodeling a historical monument? If you are interested how to do it, then take a look at this picture of the ‘Statue of the two Hercules’ in Cremona, Italy. 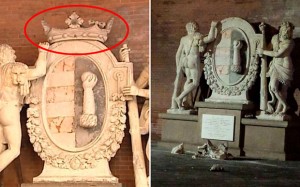 Well, it used to have a crown before two self-obsessed tourists, which nationalities are still unknown came to leave a trace in  the history of Cremona.  They managed to climb the monument in order to take a selfie and as a result, the monument created in 1700 as a symbol of the city was damaged. Cremona was believed to be founded by a mythological hero and two heroes of our time took the responsibility of redesigning its old-fashioned decoration. What is history as compared to your greatness? The Italian police is working on the answer to this question now.